TDP Supremo, Chandrababu Naidu aka CBN has strongly Condemned the demolition of 200 years old Vizianagaram 3 lanterns pillar. Vizianagaram 3 lanterns pillar is a historical monument of the king’s family, Pusapati dynasty. Municipal corporation demolishing such a historical monument has shocked everyone across the state. TDP leader CBN as well as public has questioned the atrocious act of the government strongly. Chandrababu has tweeted.,

Shocked to see @ysjagan demolish the historic ‘Three Lanterns Pillar’ in the heart of Vizianagaram. This is one of the many deliberate efforts to erase the contributions of Sri @Ashok_Gajapathi’s family to the region. Petty politics must never take precedence over history!

Nara Chandrababu Naidu has clearly stated this demolition carried out by Ys Jagan government as a part of petty Politics. Other TDP leaders have also pointed at YSRCP as Destruction and Demolition government. Eversince coming to the power, YSRCP has carried out several demolition activities. Three lanterns pillar will remain one among those.

As always, the YSRCP led Andhra Pradesh government is having its own version. The Government has ideas of building a new monument in the same place. However, the public unconvinced with the answer has raised the question stating, “A monument can be built, whether the history can be brought back?”. 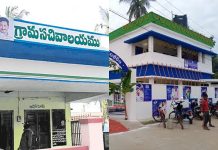 YSRCP desperate efforts to save humiliation ends with Self damage