It looks like even cricket is not spared by the Coronavirus. The BCCI, as a precautionary measure to prevent the spread of Coronavirus, has called off India vs SA ODI series.

It is already known that the South African team has come to India for a 3 ODI bilateral series that started tomorrow. The three-match series was scheduled to be started on 12th March. Three games were to be played in Dharmasala, Lucknow, and Kolkata on 12th, 15th, and 18th respectively. After rain spoiling yesterday’s game even before a ball is bowled, now comes the Coronavirus. As a precautionary measure to prevent the spread of Coronavirus BCCI has called off India vs SA ODI series.

“The BCCI is concerned and sensitive about all its stakeholders, and public health in general, and it is taking all necessary steps to ensure that, all people related to IPL including fans have a safe cricketing experience.”,  said the media release signed by BCCI officials. “The BCCI will work closely with the Government of India along with the Ministry of Youth Affairs and Sports, Ministry of Health and Family Welfare and all other relevant Central and State Government departments in this regard.” Said the board secretary Jay Shah in this regard.

Coronavirus a.k.a COVID-19 is becoming dangerous day by day. It has already affected about 75 people in India and has already killed one in Karnataka. As per the World Health Organisation reports the virus has spread its jaw to 118 Nations across the planet. With the situations getting heated up, this decision of BCCI has to be welcomed because nothing is more important than public safety. The central government has already brought awareness about precautions to be taken by the public. The government is trying in every possible way to curb the spread of this virus. 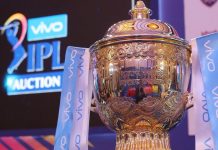 IPL 2020 to be held in September, New Schedule underway

Akula Ganesh - April 7, 2020
Going by the information published by a leading newspaper, it is learned that AP Irrigation Minister Anil Kumar Yadav is symptomatic of...

ICC awards: Rohit Sharma and Virat Kohli among the recipients