Telangana CM KCR has finally appeared at Pragati Bhavan after a gap of two weeks. Telangana Chief Minister returned to his camp office in Hyderabad on Saturday afternoon. KCR has held a meeting with the agriculture officials regarding various government agriculture policies that are to be introduced.

It is already known that Telangana Chief Minister KCR has gone out of the radar for almost two weeks. There were a lot of rumors that KCR spent this time in his farmhouse. There were several other baseless rumors that KCR was positive for coronavirus too. The opposition party has even filed a petition in the High Court about the CM gone missing. Several netizens on social media went onto trend a hashtag asking “Where is KCR”.

Putting an end to all these, CM KCR arrived at Pragati Bhavan yesterday. This is the first time that KCR appeared at Pragati Bhavan after the state health review meeting on 28th June. Upon arrival, the Chief Minister has held a meeting with agriculture officials. CM also asked the officers if the farmers are sowing crops as per the advice from the officials. KCR is expected to address the media soon about this agriculture activity in the state. CM might even visit the farmers directly in the coming weeks.

Why Revanth Reddy suggested KTR to rename as Rakul Rao? 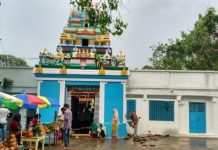 50K tests in 10 days is too low Telangana Government, double...