Some Interesting details about Young Hero Nithin’s Wedding are going rounds in film circles. Last year itself Nithin has confirmed that he will become a family man in 2020. And it looks like this is indeed going to be happened in this summer.

As per our sources, Nithin is said to be fallen in love with a girl Shalini reddy. This UK based NRI who has done her MBA in London is working there itself. They will be getting married in April with their parents already having accepted their pair.

Reports also say that they will be wedded on 16th of April at Palazzo Versace hotel in Dubai , as per the Hindu customs. There will be a series of couple other events like sangeeth in dubai itself , starting a few days prior to the marriage. And later a grand reception will be held in Hyderabad in third week of april. Many of the Tollywood celebrities will be gracing the event. 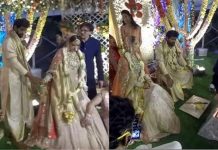