Actor Ram Pothineni is on a role, the actor has started maintaining his looks very carefully, his Latest beard photoshoot is sure to set some beard goals for guys. Beard is the most difficult aspect for guys to groom and maintain. It takes a lot of effort to maintain a well groomed beard. But for actor Ram Pothineni it all seems to be like easy made.

Yesterday, Ram Pothineni posted few photos of himself from latest photoshoot in beard. Ram Pothineni had posed in a specially designed dark coloured kurta. The star looks so handsome and ‘hunkie Kinkie’ in the photoshoot. His well groomed beard has become the real attraction among the youth. Ram Pothineni girl fans are flattered with the latest looks of their favourite star. Stylist Ashwin has looked after the styling of Ram while the costume was designed by Manish Malhotra

Last week Ram Pothineni shared a few photos of himself in Royal look from a calendar photoshoot. The energetic star is regularly keeping his fans delighted with the looks. On the workfront, Ram Pothineni is busy with ‘RED’. Ram beard look is the makeover he went through for playing in RED. Amrita Aiyer is playing the lead lady in this movie. Director Kishore Tirumala has collaborated for the third time with Ram Pothineni. Sravanthi movie makers are bankrolling this project. RED will be having it’s theatrical release on 8th of April 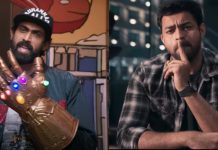